Not willing to rest on our laurels, the Center on Policing is constantly active and working on new projects or aiding our partners.

The Center on Policing also provides learning opportunities to in-service and emerging public safety leaders.  One example of this dedication to cultivating executive leadership is the Distinguished Lecture Series. These events bring law enforcement and public safety leaders together in executive leadership sessions where local, county and state criminal justice partners have the opportunity to speak with, ask questions of, and learn from leaders in their fields. The lectures also provide a forum for diverse partners from academia, law enforcement, public safety, and the community to hear firsthand from thought leaders and gain from their insight. Past lecturers include Commissioner William Bratton of the New York Police Department, Commissioner Charles Ramsey of the Philadelphia Police Department, and Chief Kathleen O’Toole of the Seattle Police Department.

The Center on Policing plays a major role in the review and implementation of the reforms associated with the USDOJ Consent Decree with the Newark, New Jersey Police Department.  The Center works with subject matter experts in the areas of use of force, internal affairs, training, community policing, bias, body-worn and in-car cameras, and other topics. Much of this expertise emphasizes writing policies and training regarding (1) bias-free policing, (2) community engagement techniques, (3) use of force, (4) internal affairs, (5) stops, arrests, and searches, and (6) data systems that warn police managers about problem officers. This work includes problem identification, policy development, training development, and implementation, and reviewing implementation compliance. During this process, community member input was solicited and incorporated where able to ensure that the community played an important role in developing the policies that would guide public safety in their neighborhoods. Internal affairs policies, training, procedural manuals, and reporting provide an enforcement mechanism to ensure compliance with these policies and training. These materials are part of the resource center being maintained at the Center on Policing and are available for use by other departments.

The Center on Policing welcomes the new Newark Public Safety Director Fritz G. Frage´. We look forward to working with him: 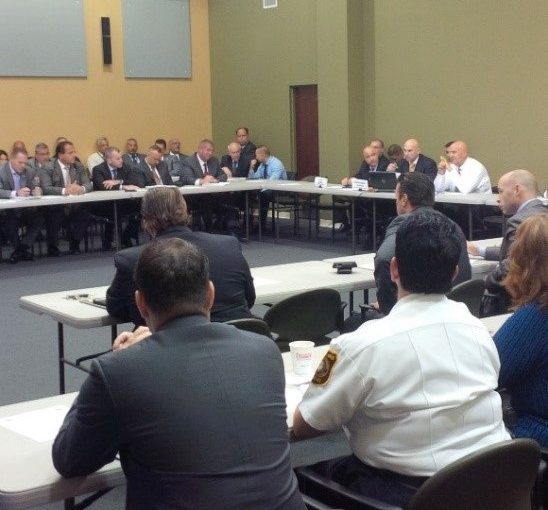 The Center on Policing also focuses on the efficient use of technology and data to drive both public safety policy and practice. In addition to supporting long-term data analysis at the New Jersey State Police fusion center, the Regional Operations Intelligence Center (ROIC), the Center on Policing has facilitated the integration of cutting-edge technology at the Real Time Crime Center- Newark (RTCC). The Center on Policing, at the request of Newark Police Department and in cooperation with the Rutgers University-Newark Chancellor’s Office, began the foundational work of the RTCC to bring together a group of partners including the New Jersey State Police and the Urban Areas Security Initiative. These partners focused on the goal of gaining access to the hundreds of records management systems in New Jersey to prevent, investigate, and solve crime and potential acts of terrorism.  The successes and lessons learned during this project have been shared as a model for the development of a South Jersey effort as well as to other states nationally.

Designed to provide data analysis and share information within the first two hours of an investigation, the RTCC provides fast turnaround information sharing support for investigators in the field. The collaboration between the RTCC and ROIC gives a broad and deep understanding of crime and public order problems in both the long-and short-term. Since January 2015, detectives in over 2,000 cases have been assisted by the RTCC, and the Center on Policing has placed graduate students in the RTCC as analysts to provide even greater support to police officers in Newark, Jersey City, and Paterson as they provide real time public safety services to New Jersey citizens.

The work of the ROIC and RTCC was recognized by the IACP in a recent publication:

The Center also works towards improving officer safety and wellness: there has been an increasing realization that law enforcement personnel are often suffering from the same challenges as the community.  Issues such as trauma, violence, substance abuse, domestic violence, depression, suicide, and distress negatively impact an officer’s ability to perform job duties in a transparent and useful manner. Only healthy officers can effectively serve their community. As we develop training programs to enhance chiefs’ leadership and management capabilities as well as problem-solving capabilities, we must also keep in mind the need to invest in the workforce. One aspect of this effort focuses on officer wellness initiatives as well as discussions on officer recruitment, selection, training, and performance monitoring.

Partnering with the Integrated Justice Information Systems (IJIS) Institute and the Command, Control and Interoperability Center for Advanced Data Analysis (CCICADA), our Center worked to write several reports for Partner Engagement in the Office of the Director of National Intelligence to support part of the statutory functions of the Program Manager, Information Sharing Environment. The COP helped conduct interviews with representatives from several fusion centers across the United States to understand the role information sharing plays in their agencies and to collect examples of how information sharing helped prevent or solve crimes. They also compared ongoing practices to plays outlined in the Information Sharing and Safeguarding (IS&S) Environment Playbook. Members of the COP also visited Utah’s Strategic Intelligence and Analysis Center (SIAC) to conduct a case study that involved information sharing in regards to immigration, drug, and human trafficking. Work on the Information Sharing Initiative concluded in September 2017, but our Center continues to share the research it did on this project and is always seeking new opportunities involving information sharing within public safety.

Our Center is proud to work with police departments local to our area. Recently, we have helped the Princeton Police Department (PPD) conduct data analysis of their CAD data on motor vehicle stops to help create an early warning system (EWS) and to conduct routine risk assessments. Analysis of data allows the PPD to not only examine how many people they stop, but also who they stop, when they stop them, and any patterns identified within their stop data. This kind of analysis can prevent police misconduct and allows the department to handle any issues before they can escalate into a worse situation.

Our Distinguished Lecture Series sponsored by Motorola is a way for us to bring those in law enforcement, academic fields, and the community together to learn about and from each other. Recent lectures include “21st Century Urban Policing” given by former New Jersey Attorney General Peter Harvey and “Opiate Crisis: Professional and Personal Experiences” given by New Jersey State Police Superintendent Colonel Joseph R. Fuentes (now retired) and NJSP Program Development Specialist Shelly Lowe. Our series aims to get the community involved with learning more about public safety and the agencies that protect them as well as let those within public safety learn from each other. Our next event will take place

Past lecturers include Dr. Anne Speckhard, Director of the International Center for the Study of Violent Extremism (ICSVE); Malcolm Gladwell, author of Blink: The Power of Thinking Without Thinking; Kshemendra Paul, Program Manager of the Information Sharing Environment at the Office of the Director of National Intelligence; Charles H. Ramsey, Philadelphia Police Commissioner; and William J. Bratton, New York City Police Commissioner.

In 2003, the U.S. Department of Homeland Security (DHS) introduced the Urban Areas Security Initiative (UASI) Grant Program, which was created to provide financial assistance to address the unique equipment, training, planning, and exercise needs of large urban areas, and to assist them in building an enhanced and sustainable capacity to prevent, protect, respond, and recover from threats or acts of terrorism. In 2015, the Police Institute entered a contract with the Jersey City/Newark UASI Office of Management and Regional Integration (OMRI), which will be funded by DHS.

Initially, Newark was identified as the “Core/Principal City” with Jersey City later receiving this designation.  Additionally, based on DHS guidance and their high-risk high density populations, the area was expanded to include the counties of Bergen, Essex, Hudson, Middlesex, Morris, Passaic, and Union. It is the two core/principal cities and seven core counties that encompass what is known as the Jersey City/Newark UASI.

This UASI region represents only 15% of New Jersey’s total area, but more than 44% of the state’s total population. In addition, the area incorporates many core elements of New Jersey’s transportation infrastructure and is also dense with chemical manufacturing plants and other critical facilities. UASI is a partnership among state, county, and local governments and agencies.

You can learn more about UASI here: https://www.njhomelandsecurity.gov/uasi-grant-program/

The New Jersey Information Sharing Environment (NJ-ISE) initiative is designed to provide law enforcement, public safety, and private sector communities with the information they need to better understand their environments—including threats and hazards—and more appropriately allocate the resources at their disposal.

New Jersey’s “fusion center” is the state’s hub for intelligence and includes input and personnel from agencies such as the FBI, US Department of Homeland Security and FEMA; from regional partners such as the NYPD and neighboring State Police; from numerous state agencies; and from New Jersey’s county, municipal and non-governmental partners.

Through the fusion of information from multiple sources, the NJ-ISE unlocks information systems, making them accessible to trained analysts who then will be better able to develop a comprehensive picture on a local, state, regional and, even, national scale. This information then can be shared with field officers, investigators, and chief executives, enhancing the overall public safety efforts related to violence reduction, crime control, counterterrorism, and emergency operations.

Read more about what the Police Institute has been up to by looking at past newsletters.

The Center on Policing